John Kidd’s birth cert above is my 2nd great grandfather and names his parents. John Kidd Sr and his wife Mary Jane formerly Hutton. What could be simpler. I ordered this from the GRO (see links) Pawnbroker, 72 London-road, Liverpool. Plus 1851 UK census Mill Street, Toxteth Park, and 1861 census Upper Stanhope Street, Toxteth Park,

Then I got a subscription to The British Newspaper Archive and right off I find the expected death notice for Mary Jane but the information was a jaw dropper. (because of newspaper copyright I don’t think I can show you the newspaper itself)

But I accepted it. I went about writing emails to all the family, calling some with the shocking news that Hutton is wrong. I posted comments on trees and left postems of others and told everyone I had made a mistake and her name was Walker daughter of Abe.

Then I was able to even get the marriage record for John Kidd and Mary Jane Walker and that should have been wake up call as the marriage was after the last of the three children’s birth by about a year. But I thought maybe they couldn’t marry – but I kept accepting that my questions were wrong and vital records are primary records and must be accepted.

So after several folks changed their trees and a couple of years passed, more papers were added and from 1848 I find another death notice.

John had married two Mary Janes. My mistake had been two fold. There were more than a few death certificates on offer and knowing there would not be parents names on her death cert I did not get it. Had I gotten the death cert I would have known the death date even if it did not give parents name. And I should not have accepted such a glaring change, without starting over – especially as most of the trees now have the children’s mother as Mary Jane Walker.

John Kidd married a third time to Georgina Batten and from that record we learned his father’s name was George and he was a wholesaler.

So the birth certificate for John Kidd Jr in 1845 was all correct. We learn from it London-road, Livepool and in 1848 James Hutton, Pawnbroker of London-road is named as her father.

I still have not found the grave of my 3rd great grandmother Mary Jane Hutton Kidd. John Kidd is buried beside his second wife Mary Jane Walker Kidd. 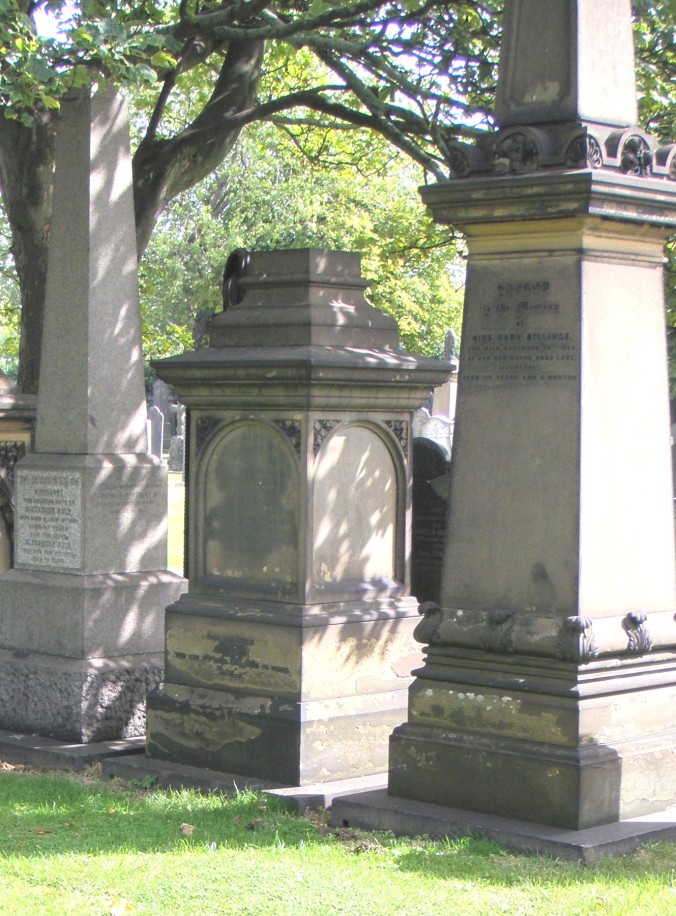 John and Mary Jane are the middle monument – a special thanks to Ralph Palin of England for his magnificent photography in Toxteth Park.

Ordering BMDs from the UK from GRO