See to the right on a desktop or below on a phone for GOOGLE TRANSLATE. All my pages have the language feature and none of my pages are monetized.

I am sick of the hydroxychloroquine story, along with a few others, that have no research or substance except to poke political puns. This pandemic is life and death and we need all of the story, not just the political jabs. This story sounded innocent enough, but by the time one gets to the end of who is connected to who, it is just another story of political hacks in it for the power and the money.

But – So what if Trump is like a broken record on the efficacy of hydroxychloroquine for the virus? He gets stuck on many things he cannot back off of although he might like to later. That doesn’t mean that we should not try to help the rest of the country to see this hoax even if all the president’s men are too afraid to try to change the president’s mind.

He said this week or sometime recently, somewhere, must have been Fox, since that is where most of his soundbites this week came from – paraphrased about what tweets get him in trouble – …it wasn’t the tweets, it was the re-tweets…

I thought then, what if the efficacy of hydroxychloroquine came to Trump in a tweeted story or just a social media story? Just some tweet he saw on or just before March 19th, when, according to Forbes, he first shilled the malaria drug, which, by the way, many journalists and military folks in America, and millions around the world have taken since WWII and before. The tales of the effects for good and some quite bad can be found in decades of stories by ole hacks and vets.

What if it was my fault?

I wrote about it on March 15th on a private journalists’ group page on Facebook and at that time another group member shared a paper which was published in GOOGLE Docs on/about March 13th, and was said to be a study presented by three people via a couple schools titled:

But this was not the first time I heard about this possible cure. It was mentioned by Spencer Wells in his podcast of March 3rd/March 4th where he was interviewed by an American teacher for his elementary school class. In that interview, Wells was asked about cures, things to take, I forget the exact questions, but his answer was simple – Quinine.

In Asia, while I was traveling around for work and play, the personal first aid kit and the pre-travel shots always included concerns for malaria among other maladies. If you lived there long enough you might pick up a few bugs, and I did. I wish I had all the records of what shots I got and what prophylaxis treatments I took.  Not even so much that I was worried, but the local doctor, the late Peter Miles of Hong Kong, (I believe he might have been either English or Australian, I can’t remember) was always needing to sell his wares like vaccines and snake oil so we all went with shots and bottles of little pills to take. He also sold a lot of penicillin.

Taking Quinine in the form of hydroxychloroquine was nothing exciting or unusual, it was a matter of course. SOP

But where did the president learn about it and why on earth did he or anyone ever thing to use this for the virus? Fine for the pundits to harp on his promoting a likely useless-for-the-virus remedy, but does no one care who or what is influencing him?

What if Putin told him to shill it? Or, Xi?

At first it seemed like critics might be touting the “back off” the drug, because people were not only hoarding, but people who were already taking the drug daily – safely and for ages for other maladies — were facing shortages. Just like with PPE, the all-protecting disposable face mask, we were told no, don’t buy those. WE know where that went.

Masks will not protect YOU anyway – don’t buy them.

(Save masks for healthcare workers. Those same health care workers and that health care that millions and millions of people cannot afford.) It is true that some masks will not in fact protect you and that the ones that will protect a person and others, suddenly became quite difficult to get like the remedies.

So was hydroxychloroquine like masks? – only wear them if you are sick – only take it if you are sick? Or was it and is it still a hoax – directed at the president?

March 19th? The president shills the ineffective drug and is shilling it to this day.

There is a lot of talk about the drug not working and the president shilling it, but not a word about who put this idea in his head. Maybe the source is more important to identify for our health, welfare and safety than the fact that he is still shilling the drug.

With a Google search, one can find quickly the writings of some who believe this is a hoax presentation and story. To me the idea that Trump has been duped by a hoax and cannot let go of the hoax is disturbing when it comes to public health.

But, who was behind the hoax is the story – not the president shilling the drug. This link goes to a page called Peak Prosperity where we see these folks talking about this new paper – and that it is believed to be a a hoax by March 16th

On this page there is clue after clue…

(I did not click on any of the links on this page. Most of the time I do not click on any in-page links unless I know the page well. I Google the information in any link and view from those results.)

Most of the people commenting on this page all joined since February 28th and this first subject comment seems to have begun on March 16th. So this site needs more vetting.

“…Yesterday I saw an article circulating that appears to be an academic paper inexplicably published on a little-used decentralzied Internet system called IPFS: LINK

It sure looked legit….”

The poster went on to say…

“…Somebody appears to have gone to some trouble to quietly take control of the uab.edu webserver, get a page there top-ranked on search engines for an expected query, and then erase the page. I’d love to know who was behind this hoax…”

Another poster adds on March 20th

“…Since Chris Martinson mentioned it in his video and cited some sources I gave this some credibility. However they were small studies and as Chris said it MIGHT help…”

“…China and S. Korea have both been using chloroquine to effectively treat patients, links below…”

By March 22nd Stanford “appears” to have denied the report.

“Stanford Medicine was not involved in a widely circulating Google document or research paper suggesting that chloroquine is a potential treatment for COVID-19. Claims that we were involved are false. Please refer to this site for accurate information about COVID-19, and please consult a physician before taking any sort of prescription medication.”

Thomas Booker, PhD, is not at Stanford…”

Then by March 26th the Daily Mail explains the hoaxer is right in front of everybody from the start, named on the paper and says:

“…EXCLUSIVE: ‘Gift from God’ coronavirus ‘cure’ touted by Donald Trump is promoted by a FAKE Stanford University ‘researcher’ who is actually a cryptocurrency-hustling Long Island lawyer whose bogus science paper was removed by Google…”

This headline and story are talking about Gregory Rigano whose name is on the page. But to this day – I cannot find one hint that homeland security or the patriarchal attorney general and his all-protective justice department are even finding out who perpetrated this hoax, for certain, much less doing something about it..

The justice department is all vapors over some paint on federal building walls and at the same time not saying a word about law enforcement violating the US constitution or a fraud of snake oil being perpetrated on the American people and the world. This Chloroquine HOAX has wasted vast amounts of time, resources and cost lives. If justice knew it was a hoax, knows it is a hoax, and lets it go on, I just want to know why?

If the hoax paper was the source of Trumps beliefs then the question is really, where did Rigano get the story?

February 25th Didier Raoult, a French doctor, had an interview with La Provence, this was posted to Facebook on February 26th and the rest is history or herstory. (Raoult’s paper was not published until March 20th but his Feb 26th interview “went semi-viral”)

Where did Raoult get the idea? According to ABC News journalist, Fergal Gallagher, on April 22nd,

“…Chinese state-run media had touted the drug as a potential cure earlier in February, and a Nigerian doctor made a similar claim, but it was the French doctor who seemed to capture the attention of social media users. An interview with Russian state-owned television, RT News, published Feb. 27, had about 350,000 views as of Thursday…”

By May 1st, Sonam Sheth writing for Business Insider was reporting:

“…Jerome Corsi, a far-right conspiracy theorist and former associate of the longtime GOP strategist Roger Stone, wanted to email Vladimir “Zev” Zelenko, a New York doctor whose work has been discussed on Fox News and who has communicated with the White House about using hydroxychloroquine as a treatment for coronavirus….”

“…Gregory Rigano, a lawyer who said he’s working with Zelenko, told The Post on Thursday that federal prosecutors have not contacted him or his client, and that is not aware of any potential law enforcement interest in Zelenko…”

…of course Roger Stone and pals.

Wear a mask. Here is my jumble blog for the virus. There are links to information for many countries and many states of the US.

All that aside, I do wish I could get one of the cinchona pubescens trees, aka red cinchona and quina, because the stuff certainly is good for heath and has been for ages for many ailments. But quite likely not worth anything for this viral pandemic. It is certainly getting a bad rap now, although so many people use and need this medicine for the ailments that quinine will help. 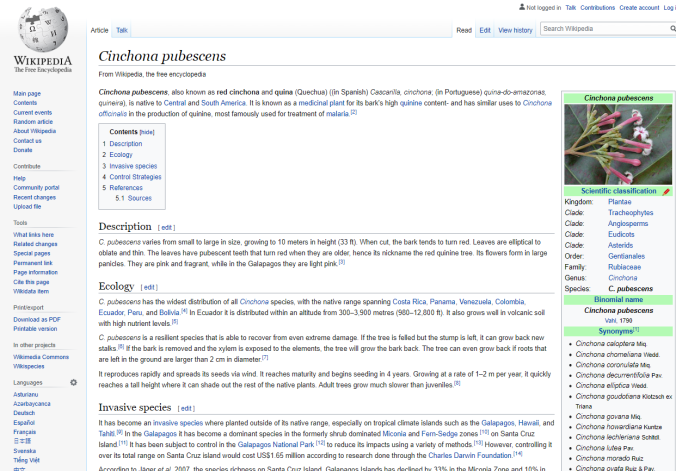