More than that, she is an in-law and were we thrilled to meet each other at a family wedding. We snapped together like fitted pieces and soon I had her reading SNPs with me, eventually gallivanting across western Virginia looking for dead people and we were not disappointed. We had Thrasher y-DNA and we had Lewis y-DNA but we wanted the deep dish research in person.

One of my favorite research stories was with my friend. She was in my car and I was driving and at first she had not let on that she thought my idea of barreling through the middle of this relatively empty region of Virginia was a wild goose chase and she did not like one bit the wasting of her vacation time on my ideas – especially since I had just taken her first to Charlottesville, last home of my ancestor, David Lewis. There I  confirmed a couple of things with the magnificent and brilliant historian Margaret at the Albemarle and Charlottesville Historical Society and was sure my research was correct.

But the idea was so risky as to be wrong and I had wanted to wait before I had said much about my theory. As we approached the goal of the Amherst County Historical Society – I knew we had about 30 minutes to get there before they closed and that it was about 30 minutes away and that they would not reopen for two days, if memory serves.

We got these and I swear I thought bff was going to have a stroke getting into the vintage building – between her poor knees and heightened blood pressure with anxiety – I got her in the door – calling back as I ran that I was going in to make sure they didn’t lock the door on us.

But we made it and as she leaned against the doorway of the society room I asked the man, “Do you know John Thrasher?”

“John Thrasher?”, he replied. “Of course, one of our first European settlers, there is Thrasher Creek, Thrasher Lake and you can go there.” I will also never forget the look on her face – priceless. I was taking her to walk where he had walked, and breathe where he had breathed and lived.

Following hunches worked for me that trip but there are also a couple of ways I could have solved the mystery of where John Thrasher lived in Goochland, and could have visited from my desktop. USGS and Google Earth. Goochland was the original county and later both Albemarle and Amherst were formed from the parent county of Goochland.

The USGS is searchable and can point to most geographical locations.

1738 The earliest land record found for John Thrasher in Goochland County is noted in Cavaliers and Pioneers, Abstracts of Virginia Land Patents and Grants, Edited by Denis Hudgins, Volume Four: 1732-1741, Virginia Genealogical Society, Richmond, 1994, First published serially in the Magazine of Virginia Genealogy. (see below for additional entries from Cavaliers and Pioneers) and the entry on page 179 tells us that he obtained land in the County of Goochland in 1738 described as, “JOHN THRESHER, 400 acs. Goochland Co., both sides of Buffalo Riv. near the blue Mountains; 1 Feb 1738/39, p.173. (Pounds)2.” (This same patent is also listed in Central Virginia Land Patents from “The County Abstracts” for Goochland, Albemarle, Cumberland, Buckingham and Amherst Counties in the Virginia Land Office 1735-1774, by Eric G Grundset and Paula Hollis Grundset, 1999. also has 1745 patent)

By 1745 many of the well known names of the early settlers are established. John Thrasher and David Lewis along with a few other notables are listed in the county road orders records. Each place kept their book of the work the men did as the community called for their work. The ‘road orders’ are a wonderful source. Then it is a matter of locating your ancestors’ place and going there — in person or digitally.

Virginia.org has the Road orders in PDF for you to download and read. (beginning page 5 of the pamphlet, page 8 of 41 in the PDF)

“25 April 1745 O.S., p.10 Road./ James Taylor is Appointed Surveyor of the High Way,  in the Room of John Thrasher, and the same hands that were Appointed to work under the same Thrasher. are Ordered to Assist The said Taylor In Clearing the same./.”

Amherst County historian contends the first European settlers arrived in today’s Amherst in 1745. This record establishes John Thrasher’s residency in Albemarle County by 25 Apr 1745, noting the Vestry meeting was held in his “Room.”  At the same meeting, orders were made for David Lewis.

The Blue Mountains. Our John Catlett is thought to be the first European to see and then report this sight of the blue mountains to the west. See the blog for him and also ancestor Robert Taliaferro both who lived and died circa 1670 at the fort at Port Royal, Caroline, Virginia another place my BFF and I visited while she was here. Horn’s Restaurant makes wonderful Milkshakes.

David Lewis… and the subject of the settlement of the court house was continued to the next meeting referring to a report coming from Peter Jefferson, east of Rivanna River (father of Thomas Jefferson), Allen Howard, Charles Lynch east of Rivanna River (founder of Lynchburg), Thomas Bellew and William Cabell. Locate the exact spot of this meeting.

GNIS even can help with the genealogy mystery of where was David Lewis living when he died – what house? The Falkner House – aka the Lewis House according to USGS — is still standing and is described as a brick house in its sale after the death of Jesse Pittman Lewis. 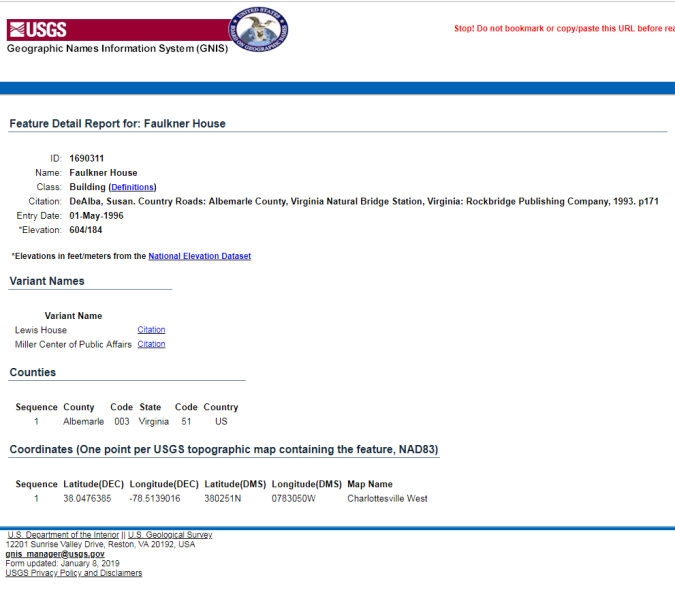 Cousin Jean J Burns research the death of Jesse Pittman lewis and the sale of his property to follow back through time to find the evolution of the home. Her research is clear – the property was brick and stone.

I am certain, from what I read, the wings to Faulkner House were added later.  But this is the house that David and Jesse built – and where likely David died and later Jesse also would have died.

What if you cannot go to visit like we have? Then get the address and let the digital world take you to the front door. The tracking is not just on the street beside the Faulkner House aka The Miller Center For Public Affairs aka the Lewis House it also has the view in the driveway. 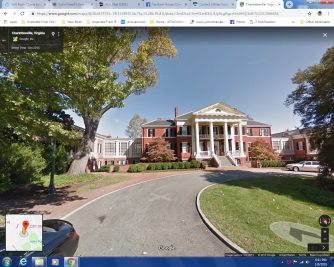 The digital visit has as good or better photos of our Lewis house.

Old photos add to the story.

more to the story…

This story as told in Wikipedia, which quotes the Register of Historic Places, is incorrect. They insist the house of Jesse and David was only wood but the estate sale says otherwise. It is clearly the Lewis home in the center of the structure and the wings were added in the 19th century.

added research notes for the Thrasher in Goochland = Amherst and move

both sides Buffaloe near Blue Mts.,

Sable Cr. thence up and down & towards Brs. of Sandy Rivr”. Pitts, halif

Room of John Thrasher, and the same hands that were Appointed to work under the same Thrasher. are Ordered to Assist The said Taylor In Clearing the same./.”

near Davis’s Path, at twenty five Puppies Cr., by a Rock a Little below the Mouth of Puppies Cr. on the S side of Buffelo, adj.