In the DNA for genealogy groups and pages and blogs and news stories, the click bait to get you to ‘read me’ – ‘read me’ – thrilling headlines are everywhere. All too often, only the most controversial bits are promoted and they are often sensationalized to the point of wondering if the wrong headline is on the story once you have clicked to read. But the world of DNA is not short of sensational subjects anyway – fluctuating admixtures, re-named Haplogroups, Ancient DNA, medical risks, medical insurance pre-exisiting conditions, are you related to a serial killer?

No journalist, it seems, can write a down-to-earth, warm and fuzzy, isn’t-this-wonderful-quest-a-lovely-story, story. The stories are often angry — “take off the gloves” “f–k” arrogance, or exaggerated glorified-to-sainthood miracles to make the top news outlets.

The coverage of humanity’s humanity is a fast run of few facts and skims over the complexities presented without feeling. But these are humans being studied and the Ancient DNA might sound like a bunch of hodgepodge but history supports that the DNA of early European settlers was replaced by new DNA. How many times do we read of history’s and herstory’s wars and rumors of wars? This or that empire expanded, continent to continent, age after age.

I want to reach out to these writers and say – “come here”, the editors too, “come here”, let’s show you genealogy, and DNA for genealogy, and this magnificent DNA for anthropology. And do this before you write, or read, another word. A man’s y-DNA might reach back in time for eons but anyone’s commercial testing au-DNA/at-DNA only reaches a few generations for matching. The autosomal DNA we hold in us does not contain genes from all our ancestors – only a smattering of the many people who fill out our family trees.

I am always quoting Alex Shoumatoff’s ‘The Mountain Of Names’

He wrote about pedigree collapse and offers several, simple references in his genealogy story from the 1970s. There is no need for me to rewrite the story of mathematics or ancestry, he explains easily the idea. This is about Europe and Europeans but this is true for every continent, every region; all peoples experience pedigree collapse. So although this references Europe, you could substitute African and Asian names to illustrate the same story for anywhere in the world.

“…The mathematics of descent has fascinated many people. “If we could go back and live again in all of our two hundred and fifty million arithmetical ancestors of the eleventh century,” Henry Adams wrote in 1904 of those with Norman-English blood, “we should find ourselves doing many surprising things, but among the rest we should certainly be ploughing most of the fields of the Contentin and Calvados; going to mass in every parish church in Normand y; rendering military service to every lord, spiritual or temporal, in all this region; and helping to build the Abbey Church at MontSaint- Michel.” And, more recently, the sociobiologist Edward O. Wilson has written, “The gene pool from which one modern Briton has emerged spreads over Europe, to North Africa, the Middle East, and beyond. The individual is an evanescent combination of genes drawn from this pool, one whose hereditary material will soon be dissolved back into it.”…”

There are not “that many” individual people seen in the DNA of any ancestry – but there are tonnes of ancestors – and if we could see them all we would see the same people over and over again named in our trees. We are descendants of surviving DNA and, as this story of pedigree collapse says, we all might be descended from Charlemagne but do we have the paper to prove it? We have the DNA. We have the DNA to the extent that our ancestors’ genes survive in us and this will be different between two siblings.

There is y-DNA and mt-DNA and I say if you have not tested those for your immediate family members then you have not yet seen DNA for genealogy. Do you know your Haplogroups? There is also at-DNA/au-DNA – autosomal DNA and there are also readings of ancient DNA SNPs and Hominid SNPs and all these pieces are different DNA. Not to mention the medical readings of these SNPs.

This chart does not even pretend to be scientific – this is to hope one might think about these different tests and the others not seen on this chart and keep them separate when talking about DNA or writing about DNA. It is true, since au-DNA/at-DNA came along, DNA for genealogy changed drastically. I am still a haplogroup girl but these are the main DNA for genealogy tests and they lead to the others. But many news stories mix these pieces and others when writing and I don’t see anyone in the DNA world telling the folks how they are missing the boat, only criticizing their mistakes. I will certainly not be correcting or picking a fight with anyone about what is right or wrong. I am no one’s expert on anything, my life in DNA is as a hand-holding helper and making sure all the family/families get their answers and share their stories for all.

I learned the art of searching for dead and living people at my grandmother’s knee and following her through county records offices and graveyards and using good old fashioned gumshoe travel after looking someone up in a phone book or at the utility companies and the post office.

If we are all descended from anyone 1,000 years ago then all of any European ancestry is also from the two wonderful identified early ancestors and we wait for the new one to be named and know there will be more discovered in the future.

I was recently writing about the Marauding R1bs (and R1as and a couple others) and how they happened to overrun Europe. This how, and why, and so on, is very much in the news and there is mud slinging from the different camps.

I have a woman’s perspective. Those thangs that hang, spit out babies.

I wrote before, to deny the hypothesis that warring marauding men swept over the continent, and replaced the population of Europe, says to me someone is ready to blame the woman – the women. Meaning…

So, like, the new boy in town shows up all handsome and the ‘wife’ goes in and kills her husband and all males in the community and their spawn and shacks up with mister new guy R1b.

Using Jean Manco’s old static site’s saved pages you can follow through time seeing the early haplogroups and later haplogroups and more later. We can see the changes in the growing populations in the haplogroups. Haplogroups y-DNA G, etc. – (those called the early farmers) all but disappear and in come the new males with new haplogroups dominating.

Above: Jean Manco’s site. See on the left side the eras and in each era see the known DNA for many archaeological sites and follow the changes era after era. See also in the index the story I wrote when Jean died and the rescuing of her site’s data. It will not be updated but it is precious information as it stands.

Even before the pushy R1bs there were the pushy Gs – every era has a new wave of migrations around the world. I was so disappointed my having only 1% of each of the hominid readings in Nat Geo’s Genographic – I so hoped to be a lot more. My you-know-who has lots more than me – but that is no surprise.

A social media poster wrote recently in response to an Ancient DNA controversy in the news “don’t give a f–k”. I wanted to ask him his Haplogroup and I wondered if he might be an R1b with the Warrior Gene.

Dr Spencer Wells, said, in his show, “Journey Of Man”, something to the effect of, if the technology to read the autosomal DNA had not been discovered for another 100 years, the planet’s population might have been so displaced that working out who people are and where they had comes from might have been much harder, if not impossible to figure out.

To think, we would have had nothing to debate if it had taken another ?100? years – maybe. As it is we need to reach out to each other and collaborate, not be arrogant and mean.

Me included. What does this mean for the feelings of R1b? Every time I write one of these comments on the guesses about the re-peopling of Europe, I do think about what I am saying and the feelings of others. But I also have other guesses like anyone else — like R1bs are supercharged humans with alien gene boosters.

Some of my favorite men and male ancestors are R1b and I love them. I brought two R1bs into the world and they are wonderful of course. I wonder a guess about this being medical, something to do with an ancient plague gene? Less Neanderthal? More? Maybe the new as yet unnamed ancestor who is now seen in our DNA – what thrills – another ancestor in my family tree!

I think these folks writing about DNA should do what I did and take a few of the courses – it is not like this industry is going away – this is growing by leaps and bounds.

If you are looking for family and ancestors you have to have the websites that have records for where your people lived and start first with familysearch as they are international and free.

I still love USGENWEB, GENUKI, ROOTSCHAT and ROOTSWEB, CANGEN, and you can’t beat ancestryDOT. All who follow my stories know where there are newspapers available – use them first, second and third.

Whether DNA is ancient or modern the story is the same; we are talking about and writing about ourselves. This is nothing but the “Who am I?” quest and the desire is as old as the oldest writings on earth. Mothers begat daughters, begat sons of men.

When I first started reading the y-DNA of haplogroup Gs almost 15 years ago they knew only two things that held up to today – There were a bunch of G’s near Chechnya and one of them got loose and went to Wales and he had a bunch of kids. 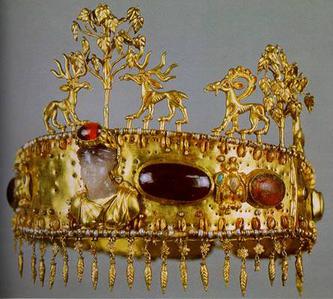 Wikipedia has this wonderful picture of a Sarmatian crown. The museum made replica deer as ornaments.  I have one you can buy, but on the other hand since it represents a revered image and we are all descended from or related to everybody then it really is all of ours to cherish as a lost memory from ancient DNA.

But y-DNA haplogroup G is relatively rare. The guesses why went from they must have entered Wales with the Romans since there were so few of them in the British Isles – arguing if they had been there a long time there should be more of them, so they were christened Sarmatians, and new comers. I got Dai Sarmatian coins and Sarmatian museum replicas. But now we know those Gs in Wales are likely the earliest farmers to cross Europe maybe 10,000 plus years ago.  So I am looking for an antique plow.

There is no reason to scream and attack to defend your ideas or to show someone else to be wrong. Well, maybe if you are an R1b with the Warrior Gene – I would love to know.