Peanut butter is as much a part of our lives as is our DNA. It conjures up memories of home and family for many people. Dai gets his own jar with his name, he likes to double dip and he is allowed – in his own jar! Aunt Fanny and I still sing the 1961 song by the Marathons on the odd occasion when we think of dear cousin Terry . This song was on the airwaves and also on the jukebox at my stepfather’s restaurant (the Riteway Drive-In). After I came along the peanut butter and jelly sandwich was also offered on the menu. And, my friend Olive made delicious peanut butter fudge and taught me how to make it.

This was not really The Marathons – a person took the time to correct the record. You can click here and hear the 1961 original “mistaken” song.

The song and my friend’s memorial bring to mind how history has so many mistakes and we all need to take the time to try to correct them when we discover them.

About this recording of the peanut butter song on You Tube that a follower posted:

This song was recorded by the Vibrations (who sang the original Watusi) under the name The Marathons. The manager of the Olympics (who sang Western Movies) were on tour so their manager secretly inked the Vibrations to record this as “The Marathons.” Chess Records discovered the fraud and kept Arvee records from releasing it. Chess then re-recorded and released it.

So it was not The Marathons but The Vibrations! Here all these years I never knew and never knew why the song did not seem to do so well. I was singing the tune from the time it came out and Aunt Fanny, Cousin T and I all sang it as we prepared lunches or anytime we thought to harmonize. Aunt Fanny and I sang it for Dai not but a few months ago, so the tradition is almost 60 years old. Good for George Johnson to leave the note to tell us what is right and correct the record! 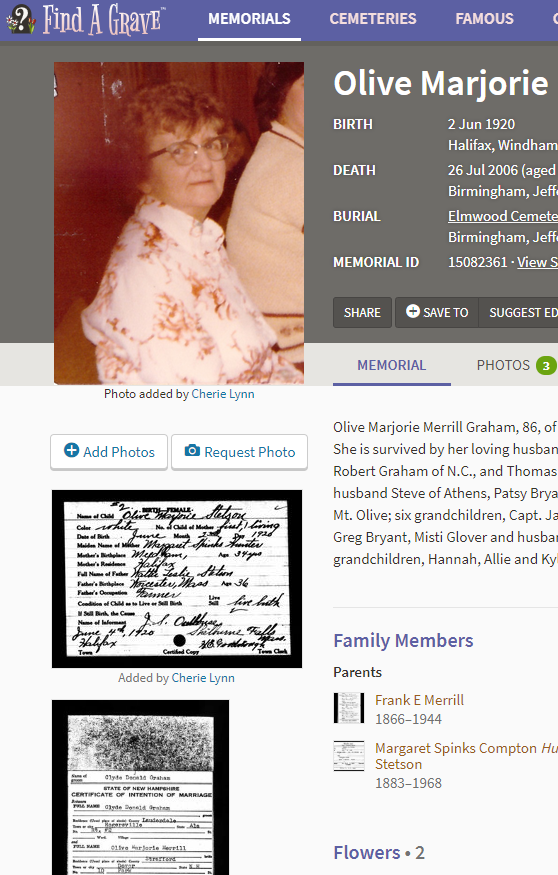 The parents names are still not quite right but much better than it was before when it was incomplete. Frank Merrill was the adopted father of Olive, her adopted mother’s, Marie’s, burial has not been found. (I will find it, if possible) But with no mother attached on her memorial, I was able to add her biological mother whose memory she so cherished. Her mother’s, Margaret Spinks Hunter Stetson’s memorial does have Margaret’s husband, Olive’s father, attached. So they are once again close.

Dear lady Olive Marjorie Stetson Merrill Graham loved peanut butter and made the most wonderful creamy melt-in-your-mouth peanut butter fudge you have ever eaten. She would make fudge and bring a tin of the fresh chunks to Elmwood Cemetery where we both worked. She would always bring me a little box to have for my own. I cannot describe well enough the sweet lady Olive. She still had a tinge of her northern accent and always talked and greeted with a smile. If you had occasion to inquire in the office of Elmwood from the 1960s and for the next few decades, you likely were helped by Olive.

Our dear Olive Graham came up this week when I saw her in a photo I was sharing for another reason. I knew when I saw her picture, and based on her age, she would likely have had to pass by now. I thought of her wonderful kindness and scrumptious fudge and generous spirit, so I decided to look for her. Would there be a Facebook page or a tree? And would there be a Find A Grave to share her photograph for posterity?

No, I did not find a tree made by near relatives, but yes, I did find a Find A Grave memorial – BUT it was wrong!

I thought, what a can of worms to be a volunteer for the site and see these kinds of mistakes. Olive being such a lovely friend I could not just let it go. I wondered if there would be records to verify what I remembered, and where on earth was I going to get the time to get it corrected? This was going to take searching for documents and several notes to be sent.

But there is nothing like honoring a friend or family with memories and there is no better place than the free Find A Grave to do it. And there is no place like newspaper databases to bring the past to life and have the stories that go with the records from sites like ‘familysearch’, ‘ancestry’, ‘findmypast’ and ‘myheritage’. Of course Ancestry.com is the best and the biggest for records and for Olive’s life, gotta love the wide variety of records that brought her life into focus.

Between my fading memory, the records, and the newspaper stories, the only thing I was missing was a pan of Peanut Butter Fudge to eat while I read pieces of her and her family’s life stories. Yes, she later married and had a lovely and loving family and I knew her well beyond her tragic childhood, but she had told me a bit about her early years in Vermont. I did not know a lot of the story but I knew she was adopted and that she had always known who she was. When she was a baby, her father had died and her mother had a breakdown, described in hushed tones. Her adopted father also died young, but I have not gotten to the bottom of his story yet.

When I saw Olive’s Find A Grave memorial, there was no mention of her biological family which she had shared with me, only her adopted father.

It took just a few hours. The 1930 U.S. Census shows that Olive was listed as adopted daughter to Frank and Marie Merrill. I could not have put my finger on it at first, but I knew for some reason, in my heart, the name, Frank Merrill, was wrong when I had initially seen her memorial.

The records in the NE US and New England states are often exquisite. Folks who have only searched for people from areas which have had records destroyed, like much of the American South, will be thrilled with the often complete sets of vital records for New England and elsewhere.

Olive’s marriage record, and then her birth record, led to her parents’ death and marriage records. Their names and dates led to the story of the tragic accident.

“…and a daughter, one year old…” Our Olive. See all the credits below. There were so many wonderful stories in the papers. Sad but wonderful to find and read the full stories on the best site newspapers.com. I have tried many of the sites and they are the best for USA newspapers for the 20th century, at least where I search

What happened next is for the ages to guess. But the records show life for Walter and Margaret seemed good. A loving couple who worked hard on their farm and clearly had made a success. The records show they owned their farm, and they owned this car that Walter lost his life in. A lovely life seemed to be in the offing when this terrible wreck occurred in 1921.

Fast forward to the 1930 census, to the only public records. Dear Margaret is a patient in the well known Brattleboro Retreat Home where she remained until she died in 1968.

Olive is named as the adopted daughter of Frank and Marie Merrill but someone must have shared many stories with her, because she shared a few memories with me over peanut butter fudge. She treasured the memory of her mother and father and I am glad I took the time to treasure her sweet memory.