Clearly Nellie won she didn’t need to read Carnegie’s book – it was her house and Sherman worked for her and clearly, according to the November 1923 newspaper account,  Sherman did not give the lady what she wanted. The Kidd murals were ready and delivered by November but were not in her Dining Room from some time in 1924 when she had the Angeli brothers paint the room’s walls as she wanted.

From Ancestry.com the U.S. Passport of Eleanor N Cosden. Her 1921 passport notes she was born in Henderson, Kentucky. Later she was known as the belle of Tulsa when she met and married Joshua Cosden, one of two husbands from what i can see.

But this force of will and fight for one’s own desires was only ever to be won by Nellie, Mrs Joshua Cosden – Eleanor Nell Nellie Neves – sometimes called the belle of Tulsa. Sherman needed a lesson in ‘the customer is always right‘.

But the story is clearly missing many pieces – reading about this 4′ X 111’ mural in July of 1923 – I cannot see how Ms Cosden did not know what was coming. from the Miami Herald: “…after the introductions we went into the workshop to view Mr. Kidd’s canvas. It is a mammoth mural – over a hundred feet long by about four feet tall. It is being painted in sections. It visualizes the story of De Soto, from the beginning of his journey to the new world to the end of his life, his burial in the Mississippi river. Florida is pictured in many of the incidents…”

Certainly I might think Cosden and company and all the Gilded Age temporary residents of The Pam Beaches, would not have been in town for the summer heat – this was the time for New York’s Long Island, New England, The Alps and not likely reading the local newspapers – but I might be willing to bet this must have been a plan that Mrs Cosden no longer wished to pay for?

The Mizner story speaks of some of Addison’s close lady friends he traveled with and Nell Cosden was one of them. Addison and Eleanor toured Spain together and although I don’t find references to Addison’s comments about Nell – he did speak out of turn with a bit of a kiss and tell with a couple of ladies, married and single.

But it does not appear Sherman totally lost in the brou-ha-ha of Mrs Cosden wanting all three of the Angeli brought to her home for painting. Sherman just did not have his mural of the life of Desoto in the place for which is was painted. But where was his work placed in the house after Mrs Cosden had the Angeli brothers transform her Dining Room? Where did the Kidd mural on canvas go and when did it go?

The November 7th 1923 article in the newspapers say R Sherman Kidd has finished the murals for the Cosden home, Playa Riente.

The subject is the problem, apparently Mrs Cosden said she wanted a replica of the Davanzati Palace in Florence and Sherman gave her the life of Desoto.

Earlier 1923 article notes Sherman’s work for the Cosden house was 111 feet long, painted in 18 foot lengths. And it says ‘for the Dining Room’. Searching for those murals painted by Sherman has become a bit of a challenge but the more I search for them the more there is to learn.

All know I love newspapers for family and local history research – there are a few databases and I have access to three subscription sites and have had others in the past. About the best for many American locations is Newspapers.com but we all know, who has the best is individual to each research project – so read the newspaper lists of each company and what years they have. Newspapers were the Facebook of their day – if you want the story – read it from the newspapers. An ancestor does not have to be named – read the papers of the city, the town, their place.

The Library Of Congress has a magnificent collection; Ancestry.com has a nice collection of papers; Genealogybank.com; Paperofrecord. The Globe And Mail’s Canadian Heritage from 1844 is impossible to find, the links fail – when I am searching – I email the paper and ask them to send me a link – not sure the issues with their website but do what i do and email them or use proquest at a library. Even The Toronto Star’s site is buried in the search engines and nothing easily seen for that pay website, “Pages of the Past” Toronto Star.

The amazing wonderful history to be found with newspapers.com is that they are in the 21st century with their website for sharing and linking and adding to Facebook and linking into emails – I have always said if one could prove with sharing what is in newspapers they would sell subscriptions like hotcakes – I wonder if I will learn to what degree?

Much of what I am currently using is https://www.newspapers.com/ but I also am currently using Genealogybank and in the recent past for researching Sherman from coast to coast I have also used newspaperarchive and of course have Ancestry.com”s pages. So certainly there is an abundance of newspaper stories – but no one database or newspaper tells this story.

The story of  Sherman’s mural is told and followed up with the next year, newspaper stories announcing that the Angeli brothers came from Italy and painted the Dining Room as the Palace for Mrs Cosden.

Another year passes and stories tell of Jose Sert painting notable murals for what was referred to as the Great Dining Hall.

The family was not without intrigue. In the summer of 1924 during a visit of the Prince of Wales to their Long Island home a sizable loss was sustained.

The britishnewspaperarchive is just wonderful for this family and we see more of the lives of all the people and who they were around. (This is a pay site but for my family has been well worth the cost.)

… co-operate with criminals in this country. The mystery surrounding the theft of valued at ,£25,000, from the home of Mr. Joshua Cosden, the oil millionaire, last summer — the time of the Prince of Wales’s visit — remains unsolved, although interest in the …

But long after the intrigue of new paintings for the Palm Beach dining room, and jewel burglaries at Cosden’s Cedars home on Sands Point, Long Island, the Kidd murals are mentioned as being in the Cosden (later Dodge) Palm Beach home in March of 1925 – but where? 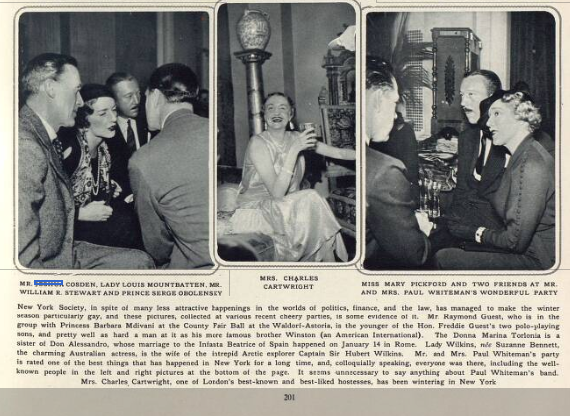 On the left: The intrigues of burglaries at Sands Point, Long Island and sales of Palm Beach houses did not slow down the Cosdens they were just no longer enjoying the social scene together. This 1935 clipping from Tatler Magazine shows Joshua Cosden out with Lady Louis Mountbatten and friends.

In 1935 even Sherman was still doing well – only Addison Mizner had passed. Nell was still getting her name in the papers and was making sure of it.

As late as 1940 newspaper articles mention Sherman’s celebrated murals in the Cosden home – we know they did not remain in the Dining Room or any Great Dining Hall – but where were they? and, when did they leave? They were painted canvas 4 feet x 111 feet in 18 foot lengths they must have been noticed when they were carried out.

And newspapers tell of Nell Cosden’s successes in 1943 –

This circa 1920 picture of Nell Neves Cosden from findagrave. – – By 1940 Nell is working as an Interior Decorator in New York City Photo from findagrave https://www.findagrave.com/memorial/193969503/eleanor-s-cosden

The Angeli brothers’ murals of the Palazzo Davanzati were painted on the walls of the Dining Room in Playa Riente, and there is a page photo of the room and its art in the house’s 1957 sale catalog. By the fall of 1957 the foreman of the wrecking company spoke about the murals and how they came down with the walls from the wrecking ball. 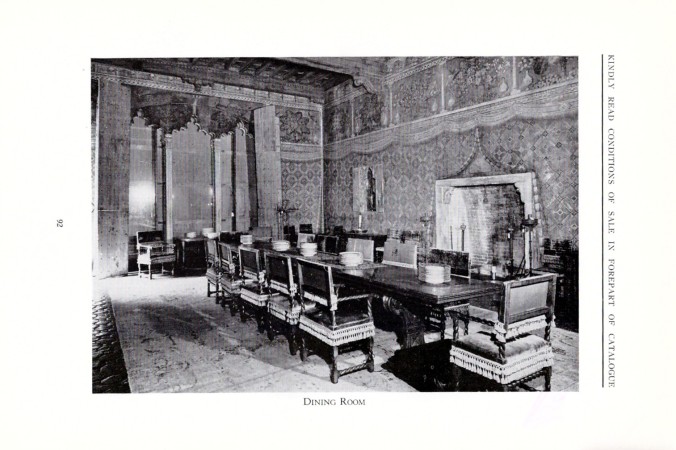 The Dining Room of Playa Riente. The foreman of the wrecking company said the Angeli mural came down with the walls by the wrecking ball

Nell Neves Cosden was alive and well, in 1957. I still cannot find anyone interviewing her about the loss of the house she so carefully planned – particularly her insistence of what she wanted in her Dining Room. She would certainly have read the story of the sale and the razing of her home in the newspapers.

Playa Riente might have belonged to Anna Dodge by 1925 and she might have sold its contents and ordered its demise in 1957, but it was Eleanor Neves Cosden who with Addison Mizner had put so much of themselves in the building.

The Wikipedia on Addison Mizner tells so much about the time that Sherman worked for him. This mentions his friend Mz Eleanor and how he traveled with her through Spain.

the newspaper stories were seemingly endless for all these folks…