Do this in color printing only. You just cannot do it in black from your printer. I don’t know anyone who could. I also suggest making many blank copies and using a pencil and being prepared to erase and correct. I check mine multiple times and often have a second person check behind me for mistakes. (The charts are always shared for use by anyone) 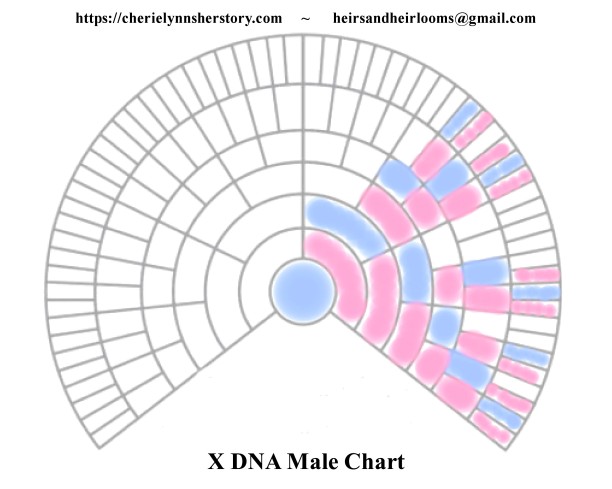 This chart with the blue circle is to plot the X-DNA ancestors for any male. Only the slots colored in pink and blue are the ancestors that can give a person their X-DNA. A man gets only y-DNA from his father and so this is a man’s/male’s chart for seeing the possible X-DNA Ancestors – all who are only from his mother side. A man/male does pass on this x-DNA to daughters.

The X-DNA chart for girls/women/females. You can see from the chart, the females have X-DNA from dad, from his mother’s X-DNA possible ancestors and also from her mother.

These are fan-shaped ancestry charts. The only difference from an ordinary fan-shaped pedigree chart is that you only care about the ancestors who are in the blue and pink colored slots (blue for men, pink for women). These are the only ancestors from whom a man or a woman can inherit X-DNA.

Looking at the male chart you can easily see that a man inherits no X-DNA from anyone on his father’s side. Men can only get y-DNA from their dads; that is what makes them a man.

Men and women both get X-DNA from their mothers. Men can pass it on to their daughters but not to their sons. So if you look at the chart, you will never see it passed from one blue slot to another.

I love Family Tree DNA’s feature where you can tell the computer you only want to see a person’s X-DNA matches — that is, people who share part of another person’s X-DNA.

This all seems simple enough, right? Now it gets complicated.

I know – throw the computer in the bin. But it’s all laid out on the charts.

But be careful, because if you do not allow for recombination, you can waste a lot of time searching for your and your match’s common ancestor in the wrong place in your pedigree.

[(The lowest number here in the matches was 62 cMs in the Irish family group, with the x shared 5+, 5-, and 4+ on the X. With R that has the known paper and lifelong family contact, the shared amounts are 21cMs (from Ancestry). (I will work with smaller amounts, but there has to be good reason))]

One good example is with my mother. She has an X-DNA match with a person I will call R, and I know that both R and my mother descend from the 1845 German immigrants, Johann Rademacher and Barbara Nee Unknown Rademacher (yes there is the guess about her parents and yes I am 99% certain it is correct, but…).

I made X-DNA charts for both mother and R and quite clearly we can see that based on the possible X-DNA ancestors for both of them, the source of the shared X-DNA must be Barbara Nee Unknown!

Whoo Hoo! How cool is that! You must be just squealing with delight at the fun of this by now – I really am.

Then mother matched someone I will call O, as well as O’s sister and son. This time I totally went brain dead and did not allow for recombination. This new match was in Ireland, from Ireland, and is Irish, but I just assumed I was looking for a common ancestor who came from Germany. I knew that mother had matched R on the X chromosome she got from her mother, Myrtle, because of the Rademacher match. So I decided that O must descend from German immigrants who had fled from Germany and gone to Catholic Ireland for refuge. (Some of this stuff is better with less imagination. :-)) But I was forgetting that because of recombination, mother’s X chromosome was actually a mix of Myrtle’s two parents, and that Myrtle’s father was the Irish-descended John Cashman!

Now I am back to mother’s and O’s X-DNA charts (below), looking for a common ancestor among John Cashman’s ancestors. We are working on the X-ancestors of the mother of Mary Dunn Cashman and her father’s (Michael Dunn’s) mother. But it will take a lot to confirm this.

Another important piece to remember is you could be related to someone in more than one way, especially in tight-knit communities. But you still have to go with what you have discovered for certain.

But! Whoa! This is only a tool and we might be seeing something completely different from the previous guesses – there could be other possibilities.

One thing to point out here is that my mother’s families are all relatively recent immigrants and the matching we are working with are people who are across the pond.

Even in the family ancestors of my mother from Quebec, Canada, some of the ancestors are not French but Irish Catholic, not many but there are a few. So there are even more possibilities for us to search for common families and ultimately the common ancestors.