The Evil Eye Amulet is older than herstory

On aging. Being treated like an old cow is taking some getting used to.

The thoughts, notes and links vary from ole cow, to older cows to the oldest known cow – with rednecks and without; cash cows, G-d cows, being cowed and cowing,

And the Old Norse – Kuga – meaning “to oppress”.

And Shiva, and how this cow remains in our consciousness.

This all comes up because of writing the Last Will and Final Instructions. I can say for sure, I don’t want to die here – I mean planet earth. If I have to be stuck with these mean spirited people in a nursing home, then I would rather be dead… enough politics.

There are tragic stories of folks passing whose DNA was not tested and for many who tested no beneficiary was named and so the DNA was lost. Today funeral homes will do the cheek swab for you and many companies will send a kit by courier.

As morbid as it might sound, arrangements should be made ahead of time. Test now and notify family and friends who will carry on to preserve and share your DNA testing.

And search for your testing company’s information about naming a beneficiary. The above is from Family Tree DNA and all companies will help you to preserve your DNA results for research and for sharing.

Of course funeral homes will help – you will have to ask locally to make sure.

And pharmacies, chemists and drug stores sell DNA testing kits. For the after-life you need the cheek swabs and as a last resort I might read the test kits at the local store and see which ones have the swab to take the sample.

I have no clue if you could get this processed, or where – I will continue to check and this might change with the wind and weather. But this kit has swabs at Boots.

The funeral home would pick the deceased up, embalm the body and bring them right back in a coffin, placed in the Living Room (or other such suitable for size and traffic room) and the doors open to let the world in and the mirrors are covered so the deceased can’t get trapped in the mirror. Well, what if they get in the mirror before anyone found them dead? “He died in his sleep.” “His daughter found him in the morning.” If that is right, he had half the night to get in that mirror, and as a child I used to want to look from the corner of my eye for anything that might reflect sideways from the mirror.

Back then the body came right back home in a hearse, or station wagon, and the lessons of life and death, life to death were complete, we watched them live, then die and now we funeralize them. Most of the guys would be milling around outside, smoking, having a “sip” maybe, and yelling at the kids to slow and calm down before there is another funeral to arrange, and the women would be in the kitchen sorting out the food. The young single girls, kissin’ cousins, delivering plates of food to the men outside, with silly grins and blushes around the young bachelors. And considering it was Alabama, not always so young, bachelors.

Dead bodies taste bitter, one never forgets, but you are supposed to kiss them good-bye.

One never forgets what a dead body tastes like, but one must kiss the deceased goodbye. I was astonished to learn recently that some folks are not allowing children to go to funerals, or visit dying family and friends, and it seems neither adults, much less children, are sitting with the deceased in the funeral home much less bringing the dead home for the week.

Bitter, is maybe not the right word for the taste of a dead person and I will have rotten egg on my face if the taste I think of is formaldehyde or whatever it is they use now in embalming but maybe that teaches a lesson about what dead means – and it might be we need to learn that lesson.

Breathing a person’s last breath is also a memory of taste that is indescribable, and after my solitary experience of this dying tradition, I can’t recommend it, my own lung cancer was found right at a year later and it is too coincidental to not be noted as spooky to me.

How can a society of people fail their own children by not having illness and death as part of their everyday lives? A child appreciates life through seeing death, learns what dead means, and what being careful means when there are car accidents and learning health and wellness and the value of health insurance and so even some politics and handling a gun.

I never thought sitting shiva at home with the deceased would ever change, certainly not disappear, not for WASPs or anyone else, and I suppose it is more the fault of capitalism re-creating and expanding the death industry.

Everyone came by, not only the relatives and friends, but the preacher came by, and gossiped about whether the deceased was in good graces, in fellowship with G-d, or not, and the local constable usually came by because they had been lifelong friends, and usually the doctor and the community nurse came by as well , and they might have another patient in the house depending on how hard someone was taking the death.

I grew up where if you have a pain you tell the doctor. And now we are asked, as a rule, about pain, with these stupid charts on the wall, to pick the smiley face, or say on a scale of one to ten.

I decided once to speak of pain and I thought I was safe to speak. The doctor’s reply was curt and fast, “You don’t know what pain is”.

I won’t make that mistake again. Times have changed.

The eye displayed to ward off evil spirits. Some early examples from the Middle East and Central Asia have the eye as blue.

Raising the Evil Eye Amulets to ward off mean spirits makes perfect sense. How long did my Pollyanna spirit and faith last? – almost to the end but did not do a bit of good. 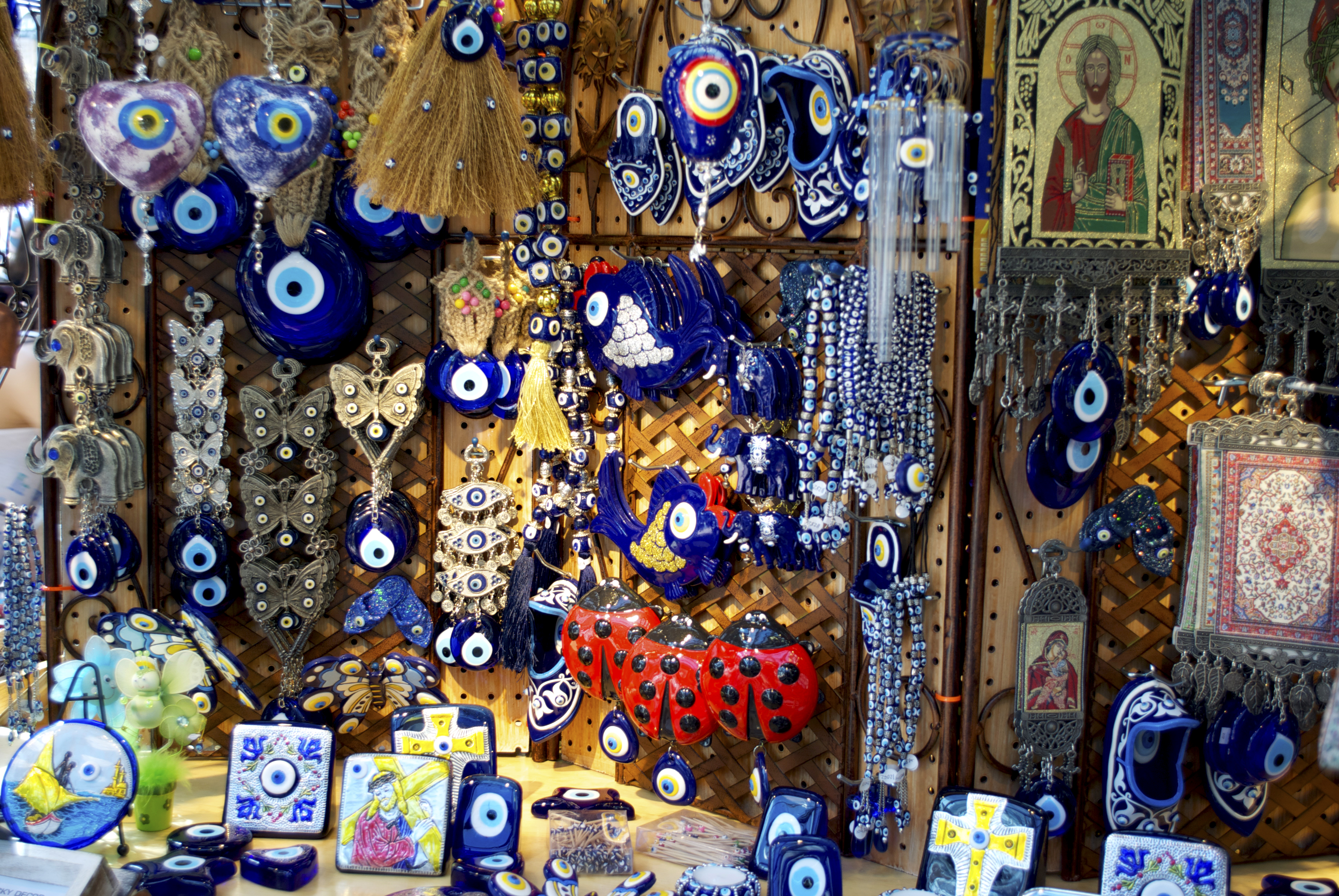 By Guruharsha (Own work) [CC BY-SA 3.0 (https://creativecommons.org/licenses/by-sa/3.0) or GFDL (http://www.gnu.org/copyleft/fdl.html)%5D, via Wikimedia Commons

Toward An End Life Plan:

I don’t wanna be in a box

I would rather be in a shroud

I don’t wanna go under the ground

Without a tinkling bell

My pieces carried on the wind

I don’t wanna miss those I love

I don’t want them to miss me

And I wanna find all the ancestors

From here and across the sea

I face my death with wonder

I think of life moments I will miss

But I will meet you all when you get there

And I will greet you with a…

So bottom line for the burial, check and see if there is a native place or something, where you can put the body up on a high platform and be eaten by birds. Of course do not give the birds sick food, so if I have some kind of nasty Cancer then cut that part off and let me be clean and healthy carrion for the birds.

End of Life Plan – but what if I am not dead? Well, if I am going to be at the mercy of one of those awful nursing homes. I choose euthanasia and if you can’t do it then give me a gun and I will shoot myself – ‘they shoot horses, don’t they?’

Pages and pages of links to articles about men and women both being raped in Nursing Homes — by workers and other patients.

The child who cried for her mother all her life

The mother who cried for her children until she died

The cousin who loved and was loved

The wife who adored and tried

My picture, my eye amulet.

The Trinity of Ole Cows

“…The Trimurti is a concept in Hinduism in which the cosmic functions of creation, maintenance, and destruction are personified by the forms of Brahma the creator, Vishnu the maintainer or preserver and Shiva the destroyer or transformer. These three deities have been called “the Hindu triad” or the “Great Trinity”…”

This screen capture is dated January 6th 2018 but on this day there were only two left at Overstock. When I was first seeing the ads, via Facebook, was well before Christmas and might have begun about Black Friday 2017 and my seeing this amulet-like necklace I could not get it out of my mind and the many thoughts and stories it brought up touched me deeply. I had not bought a piece of jewelry in many years.