Geeze Loueezz. Update coming. The story of the lost newspaper archives’ plots thicken. More information has been sent about where the dear Pages of the Past has been relegated to and still not a word about CH 1844 😦

I shudder as a genealogist to think what I would not know about our Toronto families if it were not for newspapers. Not just The Star’s Pages Of The Past, but also the Globe and Mail’s Canadian Heritage 1844. Both gone, for wider access. Of all the companies in all the countries, I would never have believed it would be Canadians who would leave human beings out in the cold with no access.

Yes, I was told that if I lived in Toronto or the immediate surroundings that I could come into the Toronto Public Library and get a library card to have access. If I did NOT live in Toronto, I would pay 30$ every three months and $120 every year and have to renew. But one has to come into a library arrange even this and only if you live “in the area” “in the region”.

But no this was not true. no one except those who live in the area can even participate in the pay features of having a card. I offered more than a few times to pay.

The newspaper messaged that it was no problem to still get access to POTP; just contact TPL, they provided the number, and pay the fee to have access. But that is not right. I called that number and the library person told me no. The more questions I asked, the more convoluted it became.

When it was still run by the Star, Pages of the Past was already one of the most expensive websites around, being it was such a limited database. I had not looked at it for years but I did look in this week. And I am so sad it is gone.

For instance, the British Newspaper Archive is available through the library system for a comfortable fee. It has old newspapers from all over the British Isles.

British Library has the magnificent British Newspaper Archive. With multiple newspapers together and a great search engine, easy saving with folders it is a great place to trace families and events.

Genealogybank has fewer newspaper articles but more USA obituaries and death notices, including a vast collection of recent USA deaths. For tracing living people, it is the best of all the choices because the names of living relatives are often included in death notices.

I loved the Globe and Mail’s Canadian Heritage 1844 for searching out early Toronto history and family. That remained fre,e but no one has answered emails about it either. It just seems to be a website that is gone. Oh for the love of Muddy York’s blossoming of Toronto Town, the history will be missed. There, the stories of our Wilson families are laid out like a genealogical journal. Dear mother Elizabeth Knox Wilson, dead in 1856, and buried in St James.

Distraught father John Wilson, confectioner, aka Sugar John or Bulls-eye John, railed against an MP who was raising troops for the American Civil War. He had one son who fought with the Union in the Navy who survived, and another son who fought for the South with the Confederate States and who might or might not have survived Elmira Prison. In any case, he was never seen again in any record on the face of the earth. 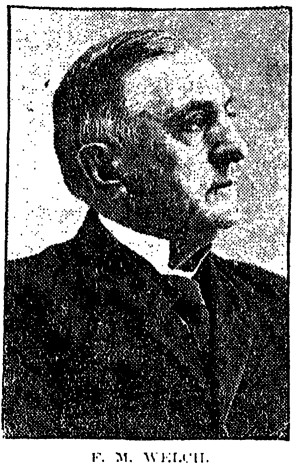 Uncle Frank Welch was born to Thomas and Mary Lindley Welch in Clarke Township, Ontario. American newspapers as well as Canadian can tell the family histories of so many people. The Canadian newspapers have always had restrictions but now it is gone for much of the world or the very wealthy. Today, Ancestry.com has magnificent interaction between newspaper archives and Newspapers.com. You can save stories, email stories, attach newspaper stories to the people they are about on online trees and share public, have them private or share with family. Amazing. Newspapers.com

Many of the newspapers cut off their own noses to spite their faces. Some papers never made it possible to share stories. But then a capitalist saw how amazingly wonderful it would be to have a gazillion research enthusiasts, like me, to find and crop out stories about specific people, places, things, events and everything else, all neatly categorized for posterity. And the capitalist made snap-your-fingers software, and then teamed up with genealogy sites. Now the people on our family trees have newspaper notices and stories of historical interest attached to each of them – in some way.

With newspapers.com you can attach an article to a person in a tree. You can email the story. You can share it on Facebook and the other social media. And everybody wants one. The story of artist R Sherman Kidd aka R Sherman Winton is told for decades in newspapers. Many people live and die with no notice in a newspaper of any kind. But beautiful stories can be found aboput countless people in the USA, Canada and the UK (for the English-language papers that I am familiar with).

Dick Eastman wrote in his genealogy blog that genealogy was the number two most searched subject on the internet.

Unfortunately, I think the ranking of genealogy searching is at three or four right now and even worse. I think politics has risen in the ranks to an unbearable level, taking over number two. So hooray for family history and may it rise in the rankings everywhere.

Maybe it was not affordable to support the websites like Pages Of The Past, but I think of what we learned from Della’s wedding, and I am sorry I am not rich enough to help to support the pages like supporting the growth of Wikipedia.

Where would I be without what I learned from Della’s wedding notice? So many little pieces of family information added to what we knew. And that opened the door for additional research and led to more family members.

Della’s wedding was covered in the paper with immediate notice and great detail. Family and business friends of Thomas D Wilson of Wilson and Cousins of Toronto, and all the in-laws’ family besides, attended the wedding. His previously lost brother and an unknown brother, two new cousins of the wife, and all the groom’s family from Markham.

This information led to looking for more about Della after she married. Did she move away? Did she have kids? But as the records grew, it appeared she was sometimes estranged from him. Then there was the newspaper report a few years later that her husband George Nixon had been killed  in a dispute at a construction site where he was working as of some kind of inspector.

The newspapers were the Facebook of their day. That was not all a bad thing, and people looking for their families have to search out minuscule bits and pieces. Della and her brother John (our Pop Wilson), played a duet which was noted in the papers.

As a tool of genealogy it will give something to everyone who lived in any place. An ancestors’ name or family might not have ever been mentioned – but life all around them would be mentioned.

Our family from Huron, Ontario, never had their name in the newspapers of Louisiana but they lived there for up to a half a dozen years, trying to make a go of working with Uncle Frank Welch’s many businesses. The business was wonderful, but great Aunt Penny had been told that Miss Margaret Lorinda could not bear the mosquitoes and the potatoes were… something…

The newspapers tell the stories of the conditions of the men who were building those railroads from the Florida panhandle to Texas and beyond. They were going through swamps and sand, and you can read the progress in the papers all the way up to Uncle Frank’s death. Uncle Frank was like GG Grandpa Albert Welch of Toronto. Albert bought all those newspaper ads for his stove business on Queen Street.

Bulls-eye Wilson and the MP Arthur Rankin affair – that is a blog of its own.

Newspaperman John Ross Robertson reprinted many newspaper stories from his famous column in his Landmarks of Toronto. Of course we bought a copy of the book, but we would have never known it existed if the access to the story had been limited to Toronto and region residents.

Landmark’s Of Toronto – I have my own 1st edition copy with the priceless family story. Robertson also covered ancestor John Dexter, and missed his name who was hanged in 1815 in Muddy York. But for those who would like to read the wonderful stories of Toronto you can also get them online. This provides a way to search and the search feature for all old stories makes the stories findable.

Margaret Wilson Ransom’s death notice named John Wilson, the Orangeman. More than 50 years before, the newspapers told the story of Margaret’s brother being a defender during the Fenian raids at the U.S.-Canada border soon after the American Civil War.

So much history. The story is already too long. But the research from afar is over unless  you can afford to run to Canada every time someone in the family gets married and there is a new Toronto family to research.

The Pages Of The Past and Canadian Heritage 1844 both will be missed.

Newspaper research, even with the best software and search engines, is difficult and time consuming. It is a labor of love to search through pages and hits and more hits and the perils of common names and it takes lots of time and love for family history and love for those who enjoy family history.

All the world’s ancestors have always walked through amazing times. Today the world faces itself with TMI – too much information or just “everybody knows”.

But maybe we are doomed to repeat mistakes of the past, because we do not know, we have done this all before and our ancestors might hope we let their lives come to life in the best chronicles of modern history – newspapers.

Part of Harry’s profile page (Harry Hutton Kidd) on the left are some life events and those are noted by newspaper clippings. And on the right also are the links to the website of the newspapers to the clippings on the papers themselves. Magnificent!

Today the grave memorial is for pages of the past, terribly missed crying over the loss. Please publish Della’s Wedding for all the world – it is beautiful Canadian family history. It was showing the world how it was done! Now buried.

No web link for POTP – too sad

Read BEFORE you buy! Make sure to read what newspapers any site has and WHAT years – before you buy!

No link for the Globe and Mail’s Canadian heritage 1844 that I can find – what a loss, makes me want to cry

The great ability of newspaper research to sort out genealogy dilemmas

See contents for other blogs about using newspapers in your research world wide.

This is a site with Canadian newspapers, but McAfee security is warning this is NOT NOT a secure site

Bulls-eye Wilson on Newspaper.com – worth every penny – but searching takes hours and hours