Are there mistakes in the publication Colonial Families of the USA, 1607-1775? There must be a gazillion. But can we use the publication as a place to start? Yes. Should we not believe it and ignore it because publications have mistakes? No.  Should we assume a guess at an ancestor is correct because it cannot be disproved? Please no!

I was thrilled when I first saw this – I was struggling with her maiden name and I wanted a document that gave her name as Earle. Mamma had said it – indirectly (Mamma, Emma Pearl Stripling Knight, granddaughter of Mary E through her youngest son John Daniel Stripling) and Mamma’s sister, Mary Ethel, (Mary Ethel Flowers Stripling) also knew of family relations with the Earles of the wife of Judge Mudd of Arlington, Elyton, Alabama. But the 1870 gave us an E – a clue!

But this was one of those ancestor searches that has no end. No or few Georgia records survive and guessing ancestors and posting them on trees just makes it worse. If folks think the name is known and the parents are known, no one will look for them. So my view is to try to only leave notes for research.

But it is a matter of honoring your father and your mother, the right father and mother, and you can’t do that with the wrong ancestors. Your own folks will be left lonely with no one to remember them, and taking someone else’s family is just wrong. And, we need to leave the clues to our descendants that we have lost people – who need and want to be found.

This shows two parts of pages from Colonial Families and you can see that the most authoritative source for this Earle family does not have our Mary E. 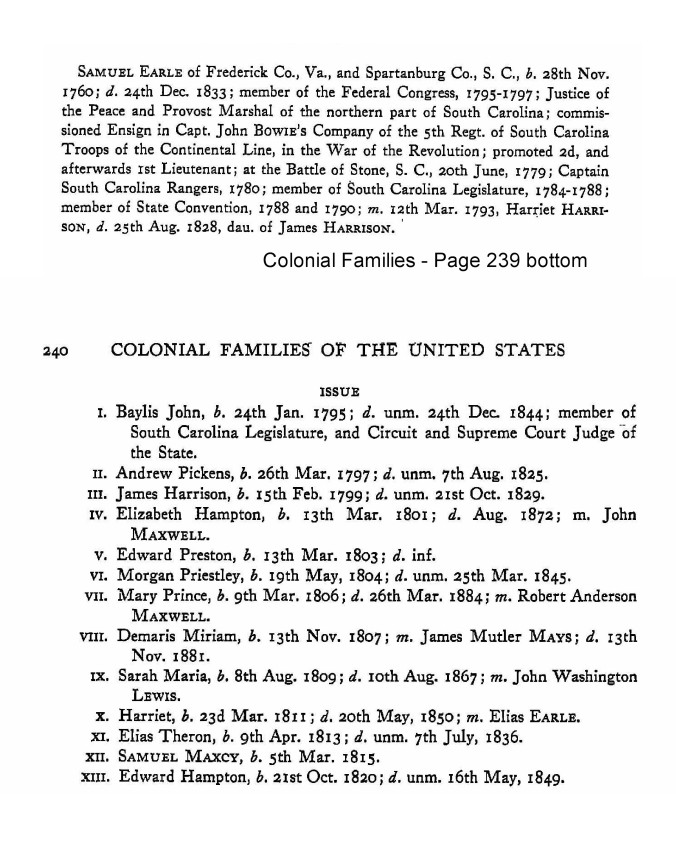 Too many trees have the claim that Mary E is a child of Samuel and Harriet.  The book Colonial Families 1607 – 1775 was first published as I can see in 1907. But there have been updates. We also have our shared Earle cousin who wrote and published her research on this very line of Earles. There is a daughter Mary Prince Earle and we see she married Robert Anderson Maxwell.

Especially now with DNA for genealogy we need to work on those relatives with these same shared ancestors and see if we already have our answers in our shared matches.

A few years ago, I wish I had my notes from the call at the time. Well, they are here in the genealogy paper somewhere. It was after 2010 because it was at this house. I had the foolish idea I would share a short story about ancestor David Lewis born c 1695 and died 1779 Virginia son of John Lewis NOT John Lewis of Warner Hall as many wish to believe. There was never any paper that said our John was John Lewis of Warner Hall and then a great y-DNA study, which continues to this day, verified in 2004 that the male descendants from our David Lewis’ many sons are not related to the Warner Hall Lewises.

I had on my tree a clear note that these families were not related and then I got a lovely email from a lady who was very new to online genealogy and thought she was delivering exciting news that David Lewis had parents, that his father John Lewis had been identified and she was thrilled to tell me his mother’s name was Lydia. I wrote back and made the long explanation and she wrote back very upset and said that Ancestry.com would never have it on there if it were not true.

So I called Ancestry. I explained the whole story and got transferred to the tech department; I was asking if there was a way to flag everyone who had this error on their tree all at once. The tech curtly dismissed the suggestion and said I could leave a comment on each tree, one at a time.

I commented, it is awful that so many people get misdirected and no way to help fix it.

He answered that people need to verify everything they find on Ancestry.

I quickly added, But people believe everything they find on Ancestry.

With that, the tech burst out with a open laugh.

I did try to share on a few trees the wonderful story of what we do know about the real ancestors and then Ancestry took the comments feature away.

Wrong ancestors and poor Mary E needs research and most of us are now too old and too tired and since so many people have left trees with the wrong people – the descendants might not ever know that Mary E calls out to join her real parents.

Colonial Families of the USA, 1607-1775 might have mistakes but we love Ancestry.com for adding the scanned books and making them so wonderfully searchable. We can say we guess and we can say – anything – But according to this, Sam and Harriet already have a Mary and she married someone else.

Where do we search – well – it might be doable – but it will not be online. Robert was a Methodist minister and he already has notations in various publications as having married so n so. Certainly when he and Mary married there was a record. How much it might tell I don’t know – but more and more the Methodist publications come up on line in pieces – a few years here and a few years there. So it is google and ask.

I also work to find the slaves they had. Wilson and wife Amanda lived next door the same year we see the name of Mary E in 1870, and we see that Wilson and Amanda have taken the Stripling name. Neither one of them, Robert or Mary E, had any money anytime that can be seen. I thought to try to find descendants of Wilson and Amanda. Their Thomas is seen in 1870 but they are hard to follow after that; their histories were inextricably bound to Mary E’s.

It was painful to find that ancestor who owned human beings. Everything about them has a shadow of shame hanging over them – but at least we can try to do them all justice and at give them truth, or at least try to not let them have the wrong ancestors attached.

Too many people are covering up for the trees and their mistakes. All of them. Those on Genealogy.com, those on Rootsweb and so on – we can help and not just look away as if it does not matter.

We know that John Daniel Stripling’s daughter, Mary E’s eldest granddaughter Leila was named Leila Earle Stripling – we at least have a record

The name Earle was not repeated in her death notice. Leila was the daughter of John Daniel’s first wife Jennie West. There are fairly good records for her family and we do not have the name Earle in Jennie’s ancestry. So between Emma Pearl’s visiting Arlington House in Elyton for tea as a relative of the Earles, and Leila’s death record I am comfortable saying Mary E might be an Earle – which Earle we do not know and just can’t assume

I would be willing to bet the Methodist church had the death notice and even the marriage notice of Mary E  from the 19th century – one day I believe we will learn where there is a repository of more publications. Many of the publications of the Methodist newsletter have survived – we need more searching.

The link to buy book one of the work of Cosette E Lewis on the Lewises and Earles of Georgia. The named Samuel Earle is her ancestor also:

Colonial Families of the United States of America. in Seven Volumes, Volume 1

George Norbury Mackenzie
Genealogical Publishing Company, 2012 – Reference – 736 pages
0 Reviews
Colonial Families of the United States of America, in which is given the history, genealogy and armorial bearings of colonial families who settled in the American colonies from the time of the settlement of Jamestown, 13th May, 1607, to the Battle of Lexington, 19th April, 1775. In seven volumes.

We see many records for the Revd Robert F. Stripling –

The above record makes me wonder if Mary E died in Heard County. We know that by 1880 Revd Robert is a widower and he is living in Jemison, Chilton County, Alabama

I believe the search for death records or death notices should be expanded to Chilton County, Alabama also for the death of our Mary E

“Merriwether col Miss, was served the past year by Rev, Robt. Stripling, who reports 4 appointments, and a membership of 450. The Mission has prospered during the year : 68 received on trial.”

Sister Maggie Ward, wife of Capt. P. H. Ward, died in Augusta, Ga., 9th of Feb. 1873. She was the daughter of J. B. and Margaret Stripling of Tatnall county, Ga., and the cousin of Rev. Robt. Stripling, who was for many years a member of the Georgia Conference. She leaves a husband and three little children. H. H. Parks

The new feature ThruLines is almost like a miracle for seeing some of these trees with crossed up ancestors. Here is hoping there can just be a flag from one person to another to say – please delete so’n’so from a family…

A note about ThruLines

Our grandmother Mary E, Mrs Robert F Stripling has no records found so far that indicate her parents.

Countless times I read from folks – “someone has this tree or that and has our person attached to parents”. I suggest looking to see if the parent couple had a child of a similar name and this you will often find to be the case. Samuel and Harriet Earle had a daughter Mary in South Carolina.

Unfortunately all the trees are easy to copy – but I suggest – more more more RESEARCH!  Although information on our Mary is obscure we can see if we look there are countless records for Mary Earl daughter of Samuel and Harriet and she married and had many children.

Most of the time the real person attaching to the real family will have many real records!

For the research concerning Mary Earle daughter of Samuel Earle and his wife Harriet Harrison there are many records.

Mary and her husband Robert Anderson Maxwell have many records and stories in books and newspapers and vital records: including: “History of Old Pendleton district, with a genealogy of the leading families of the district” COL. R. W. SIMPSON.

Mary Earle Maxwell daughter of Samuel and Harriett Harrison Maxwell has many records and many children.

James E. Bustin, only son of Edward C. and Caroline T. Bustin, of Fayette co., Ga., was thrown from a mule and instantly killed May 23d, 1868…. Robert Stripling

The Methodists first served old Lowndes county as a part of the Tallahassee District. This vast district swept across south Georgia from the Flint River to the Okefinokee Swamp. In 1832 the Methodists established the Lowndes Mission, and the first Methodist ministers riding on the Lowndes Circuit were George W. Davis, George Bishop, Capel Raiford and Robert Stripling. Tillman Dixon Peurifoy and John Slade later rode the Troupville Circuit