But I will implode if I hear one more person talk about what African Americans cannot find. I want to hear about and relish in and celebrate what we can find and we are going to find more and more and more especially now that folks are working on  the DNA for genealogy and anthropology. I might not be an expert but I am devoted to the hope that we will all find all ancestors.

I will also have a stroke if I see another of the company commercials with the exaggerations – about how much any person – with roots from any continent – can learn from admixture. And we now know that the movement of peoples is far more extensive than previously thought with more travel – and not just one way – the back and forth and mixing and re-mixing is much more widespread than anyone could have dreamed.

Just reading the locations of the various Haplogroups from Jean Manco’s pages and how we might have a specific SNP identified in a given country like England or… but I bet he had a cousin in Albania.

Any genetic genealogist worth their salt will admit, just because R1b is sort of mostly European, you cannot say for sure where the descendant came from when – sure maybe he is a Brit – but he might be an Eastern European –

Ok, yes, sure you can narrow down some with more and more testing you can get down to an area of Great Britian with clusters on a SNP – but not everybody can afford this and for those still in their boats upstream I think it is wrong to say, ‘oh… – R-M269 – you are probably a Brit’. – well why not a German, or Spaniard? It depends. And, R1b Chaldean — a magnificent African y-DNA haplogroup — I know nothing about, but it should certainly not have been assumed to be European just because it’s R1b.

R1a – Swedish? Russian? Scot? Iranian? Why would anyone assume – And why would anyone impose admixture on the early people of the Arabian Peninsula or north or west or east Africa when we know from anthropology that the movements are extensive over thousands of years and we must be careful who we label.

Just like it is said and warned time and again not to use photos to hazard a guess at biological families, we should not hazard any guess about African genealogy.

I have only worked on the research of a few African American families, maybe a dozen or so, but we always found much more than they ever believed they would find., so I am one who says “Lets look – what are you waiting for?”

Personally, I know I have some African American cousins, I can see them in matches. I wrote to one but she really didn’t want to look it seems, but later I wondered if I should ask again.

I get to proudly say my maiden name surname family fought with the Union. The other paternal grand comes from a family who define bigots but I have learned through social media the ones who moved out West mostly became liberals, and the ones who stayed in the Deep South have become more in-bred and bigoted.

I have to say, and I know I will be drawn and quartered for it, but the beginning few minutes of the Museum of African American History had me wanting to cry for the unmentioned Africans who were exploited and enslaved in their own continent or in other parts of the world as well – would anyone look for their DNA?  Before anyone ever made it across the Atlantic (other than Vikings) from the early moguls to the Barbary Pirates, from about 800 AD, many of the Christians, Jews and Animists of Africa were taken or migrated to  work the mines of North Africa or farms of the fertile crescent. What if we could find the deep DNA links to these cousins as well?

I would declare there could be cousin DNA for African Americans all through India and Central Asia and also we never think of looking for family in South America but of course there would have been and would be still today – if the genes were not too far back to reach in autosomal DNA one might find at least distant family.

My head explodes every time I hear about any peoples from south of the border being shunned as immigrants. When we know the transportation of countless Jews from Spain and surroundings is recorded in documents of the ancestries of America’s southern neighbors, and now we see the DNA readings for some of the Ashkenazi and Sephardi heritages, it is impossible for me to wonder how some WASP descendants cannot see their own shallow behaviors and hypocrisies in their belief of their importance in the universe.

But bigotry is all over. Much of the reason I ran away from home, which I write about in the blog for my mother, Our Colors, I talk some about how every continent, every country has the low man, and woman, on the totem pole. Living in Asia and then the Middle East and then 10 years in Canada, I not only saw the world differently but I see my own country and its peoples differently.

Back in Merica all the anger at each other has only grown. True, anger is growing worldwide – but that don’t make it right, as they say. I question why none of us takes a change and tries something different.

There are several African American colonial ancesors who were not slaves and who lived the American Dream and their descendants continued to – I should delete until I can ask to talk about those families or have someone write about them. Virginia was a complicated place to live at one time, as it is today. But without DNA those ancestors could not have been proven as they are now.

I remember Henry Louis Gates sorting out some of his European ancestors and I would yell at the TV – no – no – we know so many were in love – look at the census records – and they cannot be thrown out with the bath water.

My little thought is for hope – and positive belief we can all help each other to find ancestries.

I must read more of Genealogy Adventures pages but I think he has, put simply, made the information easy.

So I tried one of his suggestions:

Our first example has documented African ancestors just a few generations ago; the match, matches of couples were equal and interracial. Well equal as women have always been. And I can’t say for certain this was a love match, deep love match, but it was before slavery, and it was in America, and they were married.

And here’s the result from another admixture database for our same person:

then I tried another for our person for good measure:

Here we have our  example person’s relative, and one question would be, is the first person related to the second person from the 2nd person’s various African or Asian ancestries or from the various European? 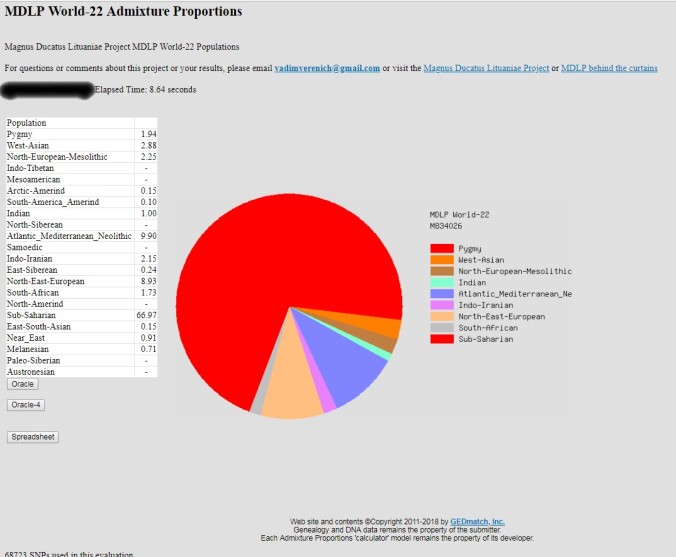 There are no conclusions, not even partial answers as to why so many do not search, do not try to find all sides of families’ ancestries. I always hope and wish we could find everybody for everybody.

At the bottom of this page is the late Jean Manco’s site for searching and seeing ancient DNA haplogroups which have been studied – there is never enough information for African and Asian peoples and regions and eras – but we just must work toward more. Jean’s site was abandoned and although rescued, it is not being updated

So this is a project for the world