(But then haplogroups are like grandchildren – every one of them is the most wonderful, amazing… and rightly so.)

I will add lots of links to websites like Eupedia and Wikipedia and ISOGG and they can short answer what haplogroups are and so on, this blog note is not for those explanations. But, simple, short answer is the mt-DNA is the mother line genetic signature. I want to think of the gene “mutations” just as a line of mother ancestresses (or with y-DNA, the male’s paternal line just a line of father ancestors).

And my genetic mt-DNA “mother’s” “name” is H10a1. So if you read the above site’s short answer of what is a haplogroup… you know the haplogroup haplotypes are lines of ascent and there are genetic markers that denote being H10a1 and these markers change or mutate so infrequently – so slowly, that I and all  my named maternal line ancestors have likely been exactly H10a1. 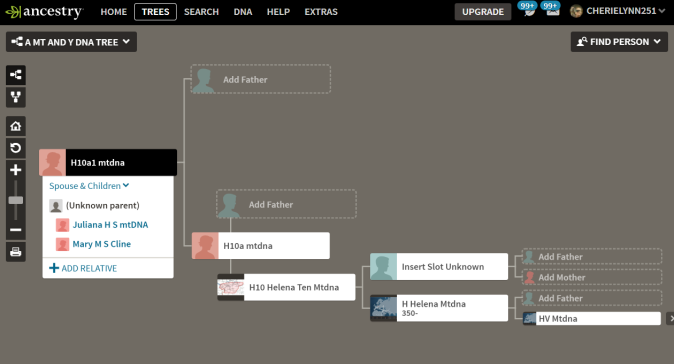 I began by thinking of the haplogroup information as people – the mt-DNAs – mothers, and the y-DNAs – fathers. There might be many generations of women who carry an mt-DNA signature with no change so each “generation on this tree represents 1,000s maybe 10s of 1,000s of years of ancestry.

H10 and ALL her “sisters” (like H1 and H3 and H7 and all the numbers inbetween) are daughters of mother H and so on and so on. 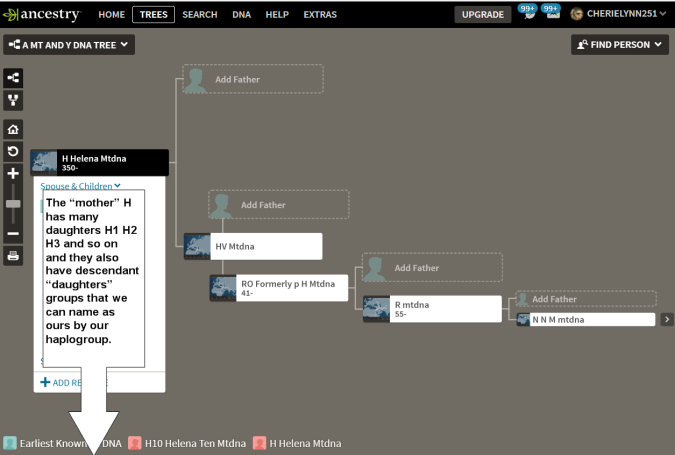 Knowing the haplogroup allows a person to follow their maternal earliest ancestress back through time through human migration. Learning, not only about your own haplogroup’s travels, but also what other haplogroups you descend from earlier, and who were the haplogroups you traveled with through time and where. Suddenly the ancestry becomes something very different – the genetics gives a person their own ancestry with windows into the past through reading about the archaeology of ancient sites.

…and this information and 5 dollars will buy me a Starbucks (which are too expensive for seniors, we need a deal)

This site has some pages that list some known archaeological sites where ancient DNA has been sequenced – (some may not be refined downstream as far as it could go but everyone can locate their lineage’s ancestries.

With this above link, there is a list of all the categories they have of different ages, eras through history – on the left side – using H10 as an example, there are two sections which have H10 mtDNA found in ancient skeletons – they are – European Neolithic aDNA and European Copper and Bronze Age aDNA. On either of those pages, use your browser’s find feature and search for H10. I suggest in searching any haplogroup, start by using a root haplogroup, because many ancient skeletons’ mt-DNA is not refined so for me I search for H10 and not H10a1. 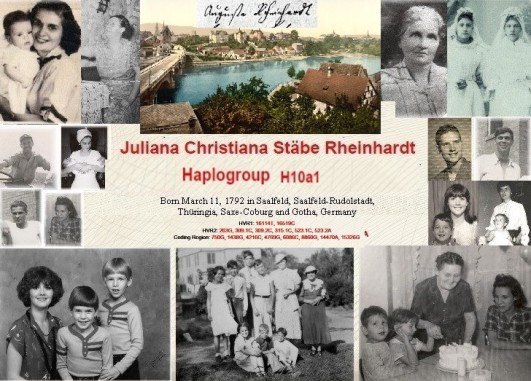 The mt-DNA genetic signature has specific people this signature applies to in a person’s ancestry. All my mother’s siblings are H10a1 because they are all from the same mother, our grandmother Myrtle Gertrude Cashman Kidd. So also all her daughters, Mary, Janie and Shirley all passed the signature onto their children and their daughters passed it on. There are many ways to genetically prove relationships, but once that is done, if necessary, then all the family can benefit from one person having their mt-DNA tested.

I rarely get new matches with my H10a1, I am lucky to get one every couple of months. I say we girls must have just kept our knees together, but I have no clue if there is info yet or not to know about why so few of us, and why so many of the others.

Few places still test the mt-DNA, and any that know me, know I am pushing first for people to test their haplogroups and leave the autosomal until later. The company with the mt-DNA haplogroup and also refined with the coding regions, and with matching with other participants, is Family Tree DNA out of houston

The project I started personally is one whose goal and mission for all is research and learning support so besides relatives and in-laws we also have had a variety of old and new friends to join us.

On my Family Tree DNA page I see my kit was ordered July 11th 2005 and my first test was mt-DNA. Many look at DNA testing and think only of the ‘pie chart’, Indian Princesses and English Lords and Ladies. But this autosomal test did not even exist for commercial testing in the beginning and today, few know their haplogroups.

For the DNA 101 refresher I suggest you read the blog on The Trinity of DNA testing for more details on the three main tests – but to speak about mt-DNA we must be sure it is understood what this test covers and what it does not.

There is almost NO genealogy to be learned much and so many order the test saying, ‘I want to learn about my mother’s “side”,  but this is not the test for learning about your mother’s side. For this both men and women want the autosomal test.

This first fan shaped pedigree chart shows the center circle as the self and this chart notes the ancestors and their places on the chart. The next chart with blue line shows that the y-dna test is these specific men only included in the test and even for them, the test only reads their singular male gene of their paternal line only, none of their other ancestors and of the ancestors covered only a singular thread of family history.

The last chart with the pink line shows the mt-DNA test only reads the gene on a singular piece of the maternal line only of a mother’s ancestry.

Even this above chart is not correct, because the mt-DNA does not show most of the gene story of these ancestresses –

This chart comes closer to show the mt-DNA test’s coverage, and that there is little information about any of these people, except this single gene line of genetic history. But the thing that is special about the test is that it reaches back in time to the earliest surviving mt-DNA ancestress in all known maternal DNA history.

But with this above chart illustration, it is easy to see why many people are disappointed in their test results when they hope to learn more about their mother’s “side”, which is all the right hand side of the chart. (For learning about the “mother’s side” one wants the autosomal DNA test, see other blogs for more details or ask)

But back to “our” wonderful and rare H10a1 folks.

When we first tested about 2005, very little was known about any haplogroups and unfortunately too many assumptions were made too quickly and we must wonder if it was useful then or even now to try to answer too many questions.

I had one match in HVR1 and his ancestress mother was from Sicily, I already knew mine was from Saalfeld, Germany and born around 1827, about the same age as our Sicilian aunt(?).

So I began to learn about Tyrol – North Tyrol

Another match was from Texas and his lines were lost in early America, no way to know anything about where his early mother had been from. We lost Ray several years ago now.

Since, there are a few more of us but still compared to my husband’s H3k1a and my father’s mathernal H1ag1, both groups who have new matches all the time – matches in the 1,000s.

This database from Sweden shows they know of four H10a1

The location of one of the ancient H10 mtDNA people

There may be little know about us, but one of us is now in a World Heritage site.

Many studies of many ages of the River Island. Inhabited for 1,000s of years

Home mountain ķivuti
Originated from adjacent ķivutkalna. It is a Finnish-Ugric Stem Word with the meaning of the ‘Stone ( s ) Mountain’, which makes it possible to think in the 1960-Year-old recovery of the open stone of the high wall daugava
Ķivutkalns is the oldest known locality in the appludinātajā area of the island of dole. Certain details of the inhabitants of the mountain have been found in the church books since 1740. The inhabitants of the mountain were also the last to have left the territory of appludināmo at the turn of the 1967 s, when all the areas had already left.
In 1968, the imants pilveris, with his hands, tore down the buildings of the parents. Next to rose riga hes turbine hall. The technical assistance of the building has been eroded by the walls of the building. It ended the history of the 4000-Year-old population.
Texta and image source: Daugava Museum.

The tiny group for H10a1

The details of the sequences are:

Changes from CRS of:

The Mutation lists are:

3 thoughts on “mt-DNA H10a1 ~ the most wonderful, amazing, exquisite, brilliant mitochondrial line anywhere on earth – in the universe even.”